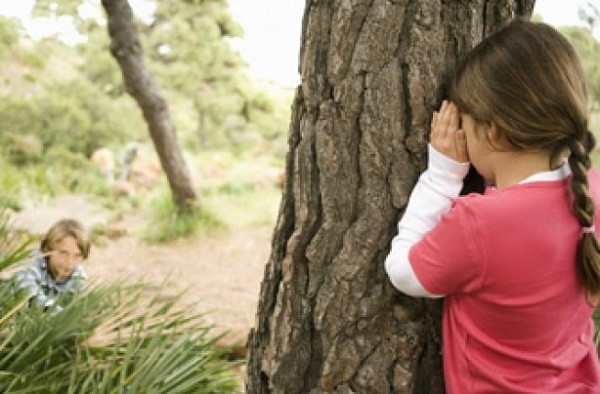 Even though children today can readily communicate with others using cell phones and computers, they may feel more lonely and isolated than they did 20 years ago. Growing up today is a lot different than it was when most of us were kids.

Today, technology helps many children keep in touch with family and friends, but the constant ability for kids to communicate with others via text and on social media comes with some risks. Of course we need to move with the times but there needs to be come balance.

Thankfully, the weather is picking up, and an easing of restrictions is on the horizon so this gives us more scope to get out and about.We are getting all nostalgic here at Good4U and want you to join in on the fun. Who needs a screen when you have these games to play.

Top of the list has to be Hide and Seek! Everyone has played this one. Best played with three people or more. Smaller kids love this… Although the really small ones might not get the concept and hide right in front of you which is super cute, especially when they block their eyes and think you cannot see them. 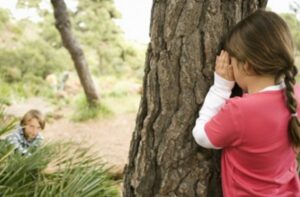 Next up is Tip the Can which is a variation of Hide & Seek, probably more suited to the older child. It’s a game of speed, cunning, and some poor player stuck being ‘it’. Tip the can has been played far and wide for many years. The ‘can’ (or a plant pot, or gate pillar or whatever) is out in the open. Whoever is ‘it’ stands at the can, counting to 20, while the rest of the Olympians run off to hide.

When the counting is finished, ‘it’ goes on the hunt. Every person that is caught gets sent to ‘jail’, but if someone manages to ‘tip the can’ before being caught, they can free one of their comrades.

Good old Hopscoth, every household today appears to chalk lying around, probably down to the multiple trips to the Euro stores during the pandemic in desperate search for arts and crafty things to keep everyone sane over the past year. Use some sidewalk chalk and make a hopscotch grid. Number the squares from one to nine. Pick a rock that is good for tossing. Small ones can bounce too much, and larger ones are hard to throw.

Start by tossing the rock onto Square
1. Hop over the rock and hop with a single foot or both feet (to follow the hopscotch pattern) all the way to the end. Turn around and come back, stopping on Square
2. Balancing on one foot, pick up the rock in Square 1 and hop over Square 1 to the start. Continue this pattern with Square 2. And so on.
If you toss your rock and miss the correct square, your turn is over. This game can be played with any number of people, but only one person can go at a time. If it’s raining or dark or too cold, you can get indoor hopscotch mats or foam pieces, or just find a pattern on the floor to follow, perhaps using a beanbag instead of a rock. 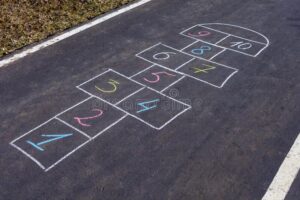 Elastics – Among the simplest of disciplines, elastics requires a good eye and a nimble jump. It was everywhere to be seen in playgrounds in the eighties and nineties. sell them.

Blind Man’s Bluff – hard beat on a rainy day. The person who is “it” wears a blindfold and tries to tag the other players. Just make sure to clear away any hazards… A big open room is best…

Red Rover – The best game ever… This Olympic sport is a test of strength, balance and brute force, but I don’t think this one was allowed before the pandemic due to health & safety, so definitely not allowed now. There was always some big tank of a fella who would take out the entire line while breaking the seal. So we will park that one but such craic…  Red Rover, Red Rover, we call x over!!

Kerbs – “Kerbs” was the bread and butter of street games. It was the first game you played while you waited for the rest of your mates to turn up for a Red Rover/Tip the Can bonanza. It was also the final game you played with your siblings as the sun set and you tried to squeeze out the last of the long summer’s evening before your mother called you in for dinner. All you need is two people, two adjacent kerbs, and a ball, preferably a plastic one.

Rules of the game:

These were the basic rules, though of course the scoring and the tenets of the game varied from town to town and estate to estate with each place adding something different to it.

Keepy-uppies – the pinnacle of footballing skill. The gold will go to the athlete with the most impressive techniques and longevity.

Simon Says – This game can be played anywhere, even in a car or other small space. One person is Simon and starts by saying, “Simon says, ‘[insert action here]’. ” Everyone must then do the action. However, if Simon makes an action request without saying, “Simon says” to begin the request, anyone who does that action is out. The last person still playing in the end will be Simon for the next round. Good when all other options run out, some kids love it but might lose them early enough.